But first, let us go on a little history lesson regarding the crush cut holders in general.

Back in 1954, Dienes invented the pneumatic score cut knife holder. There was a need in the market for a simpler slitting method that did not require a top and bottom knife.

Since the patent expired some years later, there have been other companies that have replicated the design. However, they still cannot match the Dienes quality and accuracy of our components.

The original crush cut holder is also known as the bottom load score holder. It is characterized by having the back end of the holder design to fit a dovetail bar because it has a 90° angle in the side plates and space where the blade is mounted. Below is a picture showing this feature: To change a knife from this holder, you need to take the blade and then pull down on it. By doing so, it releases it from the holder.

However, this is not as simple as it sounds. Especially when space between the holders and the supporting anvil roll is less than ideal.

Since pulling this blade requires some force, it could happen that while doing so, accidents may occur. Operators could potentially hit the anvil roll with either the knife or the tool being used to remove the blade.

If the blade hits the anvil roll, it will most likely chip or create a bald spot in that area.

If the tool hits the anvil roll, it could cause a small dent on the roll. Positioning the knife on top of this dent will wear both the knife and the holder faster.

To avoid this situation, the holder could be taken off the mounting beam and then replace the knife offline. However, you would then increase the chances of the holder not being mounted properly. Which, as we have discussed in previous entries, can affect the quality of the cutting edge and the holder’s life.

So, after years of hearing our customers complain about this issue, we decided to come up with a solution. Thus, the creation of the front load holder.

The front load holder is almost identical to the bottom load holder. The only difference is the angle present in the side plates of the holder and the space where the blade is mounted. Front load holders have a roughly 45° angle, and below is a picture showing this type of holders: 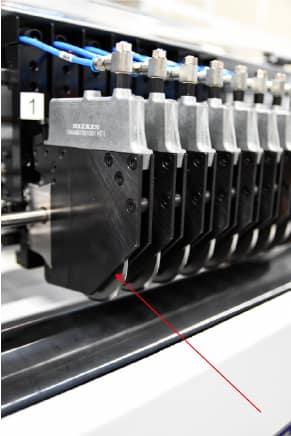 As you can see from the previous picture, this is the only noticeable difference between the 2 holders. However, when it comes to blade changes, it helps the operators. This is because it enables them to pull the knife from the front; instead of pulling the knife downwards. Below is a picture showing this motion: 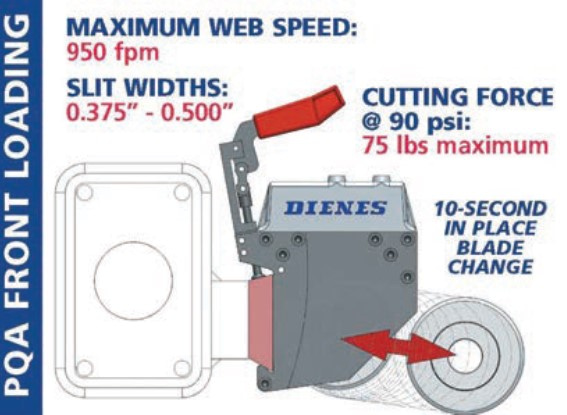 This not only helps avoid the issue of hitting the anvil roll while changing the blade, but it also does something else. Since operators pull it from the front, it allows the holder to remain mounted on the beam and ensures that it is perfectly squared against the anvil roll. As a result, it reduces set up errors.

Therefore, with this simple modification, it allows for faster and more accurate blade changes.

But we did not stop there.

As mentioned before, to change the blade, operators must grab the knife and pull it with force. They do this to release it from the mounting mechanism. But since the area to grab the knife is small (as it is inside the holder), plyers are used most of the time. This allows for a better grip on the blade, enabling it to pull it out.

But plyers can sometimes slip. Or too much force can be applied to them to have a better grip on the knife, which might damage it.

So again, after hearing the feedback from our customers, we came up with a solution to this problem. We invented the EZ knife puller. This patent-pending tool works with both the bottom and front load holders. It also enables the operators to have full control of the blade change process. This minimizes the risk of hitting the knife against another surface. It also reduces the chances of the operators getting hurt while changing the blades.

So, as you probably noticed by now, it is all in the details. And we at Dienes pay a lot of attention to them and come up with solutions to our customer’s pains.

Are still unsure about which type of holder will best suit your slitting process? Bottom load score holder or a front load crush cut holder? Would like to get more information on either the front load or EZ knife puller? do not hesitate to call our line of experts today! We will answer any questions that you have!

Providing Custom Quotes on All Products. At Your Request.

GET YOUR QUOTE TODAY